Chosen from birth to usher in a new era, Poppy’s life has never been her own. The life of the Maiden is solitary. Never to be touched. Never to be looked upon. Never to be spoken to. Never to experience pleasure. Waiting for the day of her Ascension, she would rather be with the guards, fighting back the evil that took her family, than preparing to be found worthy by the gods. But the choice has never been hers.

The entire kingdom’s future rests on Poppy’s shoulders, something she’s not even quite sure she wants for herself. Because a Maiden has a heart. And a soul. And longing. And when Hawke, a golden-eyed guard honor bound to ensure her Ascension, enters her life, destiny and duty become tangled with desire and need. He incites her anger, makes her question everything she believes in, and tempts her with the forbidden.

Forsaken by the gods and feared by mortals, a fallen kingdom is rising once more, determined to take back what they believe is theirs through violence and vengeance. And as the shadow of those cursed draws closer, the line between what is forbidden and what is right becomes blurred. Poppy is not only on the verge of losing her heart and being found unworthy by the gods, but also her life when every blood-soaked thread that holds her world together begins to unravel.

“Jennifer Armentrout has the power to control my emotions with every word she writes. From swooning to crying to racing through the pages to find out what happens next, I couldn’t stop reading about Hawke and Poppy, and you won’t be able to either.” – Brigid Kemmerer, New York Times Bestselling Author of A Curse So Dark and Lonely

“Action, adventure, sexiness, and angst! From Blood and Ash has it all and double that. So many feels and so many moments it made me cheer for the character. Read. This. Book! You’ll be obsessed!” – Tijan NYT bestselling author. 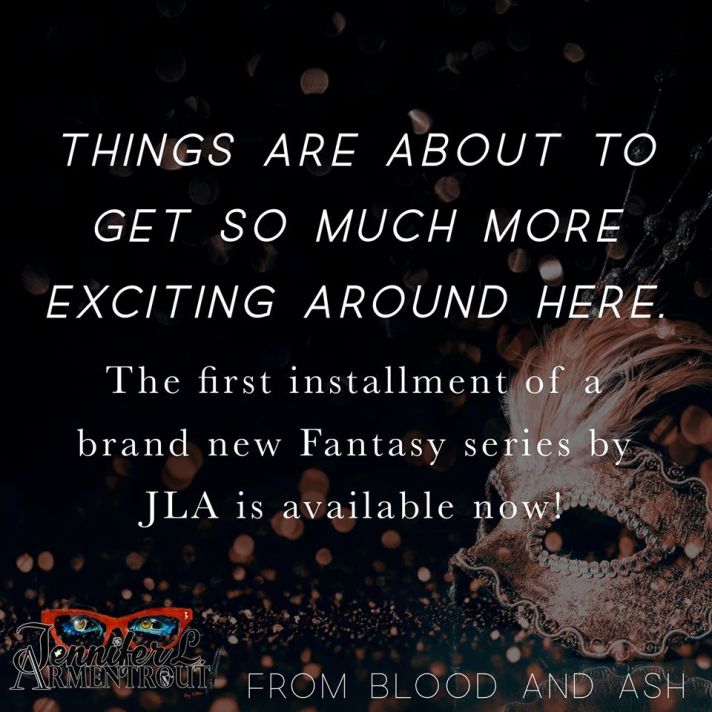 FROM BLOOD AND ASH. WE WILL RISE!

This book surprised me, but in a really really good way. Jen hinted several times that she was writing a high fantasy novel. I must admit, I was a bit intrigued. Who am I kidding? She could write a direction manual and I’m going to read it.

This book was absolutely epic and completely blew me away. It’s a big boy too, coming in at over 600 pages! Love, lust, lies, hatred, blood….forbidden.

Don’t start this book if you have a bunch of stuff to accomplish during your day. You will not want to put this one down. The plot is unlike anything I’ve ever read before. It’s like a mixture of all things good and evil in the fantasy world.

Penellaphe (Poppy) who is the “chosen” one or the maiden. She is completely veiled where no one can see her face. Very few people know her actual identity. When we meet her, her biggest concerns are Ascension. Which reminds me so much of Buffy the Vampire Slayer, season 3 where the creepy ass mayor is ascending. If you have seen Buffy or that season, are you really living? Any who, the entire story surrounding Poppy is super interesting. I had a ton of questions about how the actual Ascension actually works. No worries, it all comes out sooner or later. The whole Maiden thing was actually pretty crazy. I loved the whole “forbidden” aspect.

Enter Hawke! Holy hotness Batman! How does one describe Hawke? Let me just say he is right up there next to Daemon Black when it comes to book boyfriends. He’s so young and has worked his way up within the Royal Guard. He’s super hot and also very mysterious. Hawke pretty much turned my world upside down. He’s like this serious, yet funny, mixture of everything you want in a book BF. However, Poppy is SUPER forbidden. Which makes any scene between the two of them so hot it’s flammable! Like grab me a paper fan and an iced cold tea. You might need it for some of their encounters. PHEW!

Overall, I was super excited for this story. Jen has been teasing it for sometime. When I actually got to the reading portion, I was completely BLOWN away. The plot, the characters, THAT FREAKING ENDING! Such an amazing writer and I hope you enjoy this book as much, if not more, than I did. I’m seriously thinking about just re-reading it again. ENJOY!